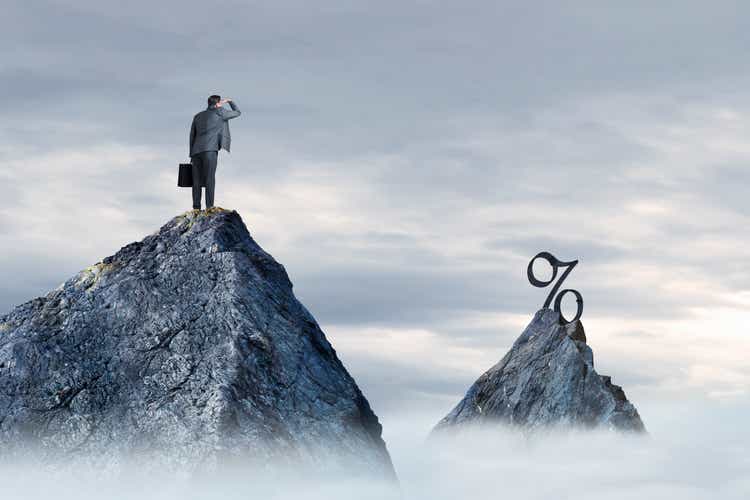 With inflation reaching multi-decade highs, there is growing hope that price pressures are peaking. Greg Bonnell talks to Scott Colbourne, Managing Director, Active Fixed Income Management, TD Asset Management, about why the spike in inflation may not bring immediate relief to financial markets.

Central banks have offered outsized hikes in an attempt to control rising costs. And while you could argue that inflation may have peaked, today’s featured guest says rising consumer prices aren’t going away anytime soon. We now welcome Scott Colburn, managing director, active fixed income management at TD Asset Management. Scott, great to see you back on the program. Inflation is all anyone can talk about. And of course there is always this hope that inflation may have peaked. But you say, well, don’t get too excited, even if it peaks and starts to come down. We’ll deal with that for a while.

Yeah. I mean, I think you can find some positive news and I’ll start with some positive news on the inflation side. We have certainly seen some moderation in the supply chains. So that takes the edge off a bit. And market inflation expectations have stabilized. They’ve actually come back to levels where we’ve seen sort of mid-summer. So there is good news. And commodity prices are also off their peaks. So, you know, there’s evidence to focus on that we’ve probably peaked on headline inflation. But I think the challenge for investors as well as policy makers is what do you do with the core? He’s out of his max level, but he’s sticky. You talk about salaries. You talk about housing, health care. These are things that are not just subject to the ups and downs of demand. And so these are sticky and these are going to be a bit sticky. And that’s going to be the big question for central banks and investors as we go forward and see headline inflation come down, but the core being a little stickier and as a fixed income investor, that’s what we were trying to figure out. around next year and the rest of this year.

Can central banks do much about this rigidity? Basically, it’s one thing to aggressively raise rates the way they did. And maybe you’re starting we see in the housing market, some of the demand is pulling back a bit, wait a minute, the game is changing, need to figure out where we’re headed here. But in terms of that basic rigidity, wages, other places, will the central bank have a lot of power there?

No. I think ultimately there is a limit to what you can do as a decision maker. They really obviously can’t deal with the supply side, which we will address over time as we work things out. They have to deal with the demand, you know, the tight labor market, wage pressures and things like that. And so we saw the answer. The Bank of Canada made 100 basis points. We’re going to get 75 from the Fed. It’s all stuff, it’s the best they can do and they’ll keep pushing it. And we’re going to see slower growth. And over time, it will fuel housing, it will fuel wages. We will see some adjustments. We see some of the high frequency data slowing down for sure. But it’s going to take a while, but central banks are catching up here. They have been slow to react and slow to deal with the changing dynamics of inflation. So, you know, they still have a ways to go before they complete the crunch cycle here.

You mentioned that the expectation for the Fed next week is 75. I think that was a brief period where they thought maybe, hey, or they could I mean, the market and all the participants, maybe they got 100, just like the Bank of Canada did. Is there any justification for what we see? As for some of the data the Fed will be watching, I don’t think we need to go as far as the BoC just did.

It’s a fine line. We went from 50 is the new 25 and now 100 is the new 50. I think the Fed did 75 they will do 75 again. There has been a bit of push back from some of the central bank governors , regional governors who just don’t want to push the line too far here. And so the end rate of where the market thinks the Bank of Canada and the Fed will kind of reach by the end of this year and early next year has been pretty stable. It’s around 3.5, 3.75%. So I think the Fed just wants to keep moving steadily above that neutral level that it has targeted.

I guess as humans we like to look ahead and seek any relief on the horizon. Interestingly, there are parts of the market pricing, although we’re not even done with the rate hike cycle, don’t worry about that. And then sooner rather than later, you’re going to see the fit again. I mean, is that a little too optimistic? Central banks continue to fly to the rescue. Roll to the rescue. But I heard a lot of people sitting in that chair and probably you last time you were saying, I can’t expect them to ride the rescue forever.

Yeah, there’s kind of a feeling that they’re going to overtake and really slow things down. And there is a possibility, we talk a lot about a recession. And then the natural tendency of the market is to price discounts. And in fact, next year they have planned two cuts by the Fed. I don’t think they will. I’m picking up where we started this conversation about sticky inflation. I think it’s going to be a headwind for them. And one of the issues that investors are really going to have to figure out is, as we see slowing growth and inflation, but core inflation remains sticky, is what are the policy levers to do governments and monetary policy makers have as we potentially enter a slow growing recessionary environment? And given the sticky inflation, the envelope is actually shrinking in terms of what they can do. So I don’t really believe they’re going to cut, but that’s what’s advertised on the market right now.

Has the term stagflation been thrown around and there are probably still people throwing it around? Does this affect our predictions for the time to come, or is it just too dire a prediction? You can’t tame the prices. You can’t knock them down, but the economy isn’t doing us any favors either.

Yeah, we focus a lot on what stagflation is. Is it a recession? There are different flavors, different problems in the world. Canada has its own Achilles’ heel in the housing market. In Europe, we are dealing with the conflict as well as the Nord Stream gas and the quantity that will arrive in Europe during the winter. And then in China, we have basically flat growth and a zero COVID policy. And so if you want to, you can really explore different parts of the globe in terms of what it will be like. Certainly, Europe and Asia do not have the same inflationary pressures that we have in North America. And so it’s going to be different around the world. And I think that’s kind of moving away from those labels, if you will, for investment purposes. Digging into what that means regionally is really more important for the rest of the year into next year.

Is that where we get clarity from? I just think in terms of… I start the show by showing the audience a nice rally in the market. I have no idea what will happen tomorrow based on the same conditions that we continue to experience. And I thought, deep down, why don’t I have some clarity about what’s going on in the world? Or am I just being too optimistic on this point that I’ll never have any kind of idea?

Yes, we really want that clarity. We used to have a fairly low inflation, low growth environment where central bankers were always able to give us the put option and we just don’t have it anymore. We have so many uncertainties and some of them are geopolitical. This is just outside the realm of policy makers. Maybe if there’s a resolution to the conflict or if there’s some relief on the commodities side, we’ll get a little more clarity, but it’s a very difficult environment that we’re operating in with labor shortages, a tight labor market, global supply chain challenges. He’s not going to show up around the corner anytime soon.