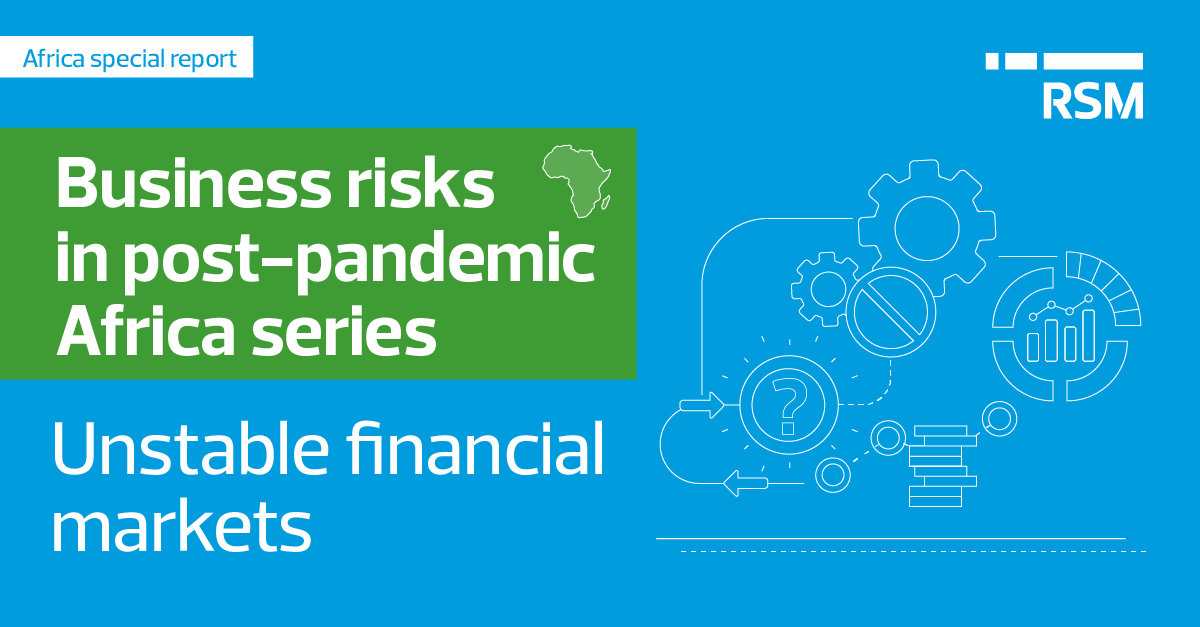 According to a recent study on Africa’s economic forecasts by the World Bank, “the economy is expected to grow by 3.6% in 2022, compared to 4% in 2021, as it struggles to regain momentum amid slowing global economic activity, continued supply constraints, outbreaks of novel coronavirus variants, high inflation and growing financial risks due to high and increasingly vulnerable debt levels.

The World Bank also cited the war in Ukraine as slowing Africa’s COVID-19 recovery, saying, “Although direct trade and financial ties with Russia and Ukraine are weak, the war is likely to have an impact on sub-Saharan African economies through higher commodity prices. higher food, fuel and headline inflation prices, tighter global financial conditions and reduced foreign financing flows into the region.

Odirile Setlhoka, RSM Botswanasuggests that for middle-market companies, “the instability of financial markets poses a myriad of challenges, including the impact of inflation, liquidity issues, rising interest rates and access to credit. due to reduced lending.All of these pose risks to commercial investors.Other risks arise from the potential repatriation of profits, as some countries in Africa have rather strict tax laws, particularly on the withdrawal of profits or the payment of dividends to foreign shareholders.

“A rigorous assessment of financial planning is essential to mitigate the risks of financial instability, with liquidity problems being a key point. Post-pandemic, most businesses in Botswana are looking to raise capital to fund the resumption of business operations. Their first objective is to manage liquidity to ensure that there is sufficient cash available to fund day-to-day operations and ongoing business activities.

“Africa could very well find itself in a ‘catch 22’ position,” says Titus Marago. “Rigid exchange control regulations and tax policies, coupled with unfavorable market factors, will make it extremely difficult to attract foreign direct investment, at a time when foreign direct investment is exactly what markets need. African financiers need to counter the current instability in the country. the steps.

“Companies will need to be creative and innovative in order to formulate viable strategies to attract and retain foreign investment. Essentially, it is about identifying an opportunity in the midst of instability and mitigating risk to an acceptable level from the perspective of foreign investors’ risk appetite.

In Eswatini, Mphile Manana said: “Just as the economy began to rebound from the effects of the pandemic, the Russian war in Ukraine became another factor impacting the growth of economies. A spike in global oil prices led to an increase fuel prices which, in turn, led to higher input and food prices.

“Our currencies have taken a hit as they depreciate against major currencies, which has led to an increase in the cost of imported supplies and inputs. Inflation has also increased, causing the cost of borrowing to rise as commercial banks increase lending rates.

“On the positive side, currency depreciation against major currencies has led companies to choose to source locally instead. The tourism sector is also positively impacted by the depreciation of the local currency and net exporters also benefit.

“South Africa is considered one of Africa’s economic powerhouses and with an economy that is the most industrialized, technologically advanced and diversified in Africa,” according to Krueger. “Despite this, it faces serious challenges as the perceived risk of investing in the country has increased, in part due to power cuts implemented by the electricity utility ESKOM. The company has implemented power cuts and these have harmed economic activities.The South African Reserve Bank has also aggressively raised interest rates to maintain price stability in the country, which has increased the cost of the loan.

Unsurprisingly, the war in Ukraine and the COVID-19 recovery in Africa are impacting economies in Sub-Saharan Africa through rising prices and inflation. This, together with rigid tax regulations and policies and unfavorable market factors, will make it extremely difficult to attract foreign direct investment. The government will have to put in place attractive policies and initiatives to make Africa an investment destination in the future.

2022-11-22
Previous Post: 2 solid index funds that investors can buy with confidence in a bear market
Next Post: British Business Investments pre-tax profits up 76%