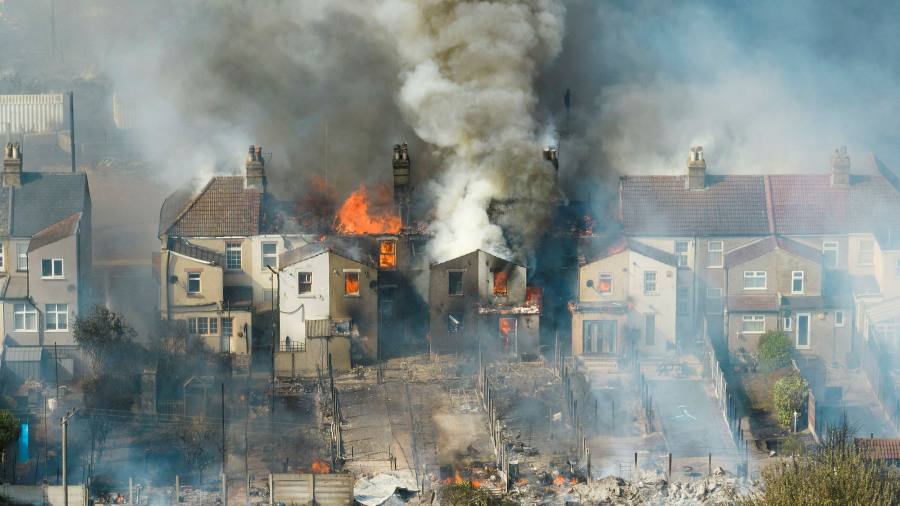 Extreme heat is a wake-up call for infrastructure investors

On the day the UK had its hottest day on record, people glued to their TV screens saw a row of burning houses. Rather than worry like many of us about the surreal sight of wildfires so close to central London, Mike Fox’s attention fell on a power cable in the background of the flames.

“My thought was OK, it probably has nothing to do with that pylon. But assuming it wasn’t properly maintained and created a spark that created the fire,” he says. The script told him is reminiscent of PG&E, the largest utility in the United States, which filed for bankruptcy in 2019 after fallen trees on its power lines caused widespread wildfires.US headlines called it the first bankruptcy world related to climate change.

It is Mike Fox’s job to think about the infrastructure risks caused by climate change, as he manages a sustainable fund at Royal London. But most companies and investors, he thinks, don’t. “The risk to existing infrastructure is quite significantly mispriced by the markets,” he says.

This must change. The July heat wave that swept through Europe made it difficult not to notice the failings of existing infrastructure in extreme weather conditions. The trains had to run more slowly. A runway at Luton Airport has buckled. Some operating rooms became too hot to operate and schools closed. In a warmer world, infrastructures will have to adapt. All of this creates opportunities for investors.

There have long been good reasons to invest in infrastructure. It is popular with institutional investors because it offers consistent returns in relatively resilient sectors, such as utilities or transportation, which are often based on long-term, inflation-linked contracts.

Retail investors can also invest in many infrastructure funds – although, as they must access the asset class through listed shares, they must accept additional volatility. But the returns have been steady. The isshares Global Infrastructure ETF, for example, has returned 8.5% per year over the past decade. In what has been a terrible year for equities in general, he lost only 1%, compared with a fall of almost 17% for the MSCI World ETF.

With the effects of climate change becoming increasingly apparent, investing in infrastructure is more likely to be ESG friendly. Traditional infrastructure funds are eyeing green power: they can’t ignore it. Holdings in the isshares Global Infrastructure ETF include Australian toll road operator Transurban, as well as NextEra Energy, the world’s largest wind and solar energy producer.

A report by Linklaters lawyers at the start of the pandemic found that global infrastructure funds planned to increase their green assets by more than a fifth by this year. Green and climate-resilient real estate and electric vehicle infrastructure were two of the main areas of focus.

Catherine Hampton, investment manager at Cazenove, sees some infrastructure funds that don’t have ESG in their name as essentially sustainable investments. These include International Public Partners, a listed investment firm. Among his holdings is the Thames Tideway Tunnel, which will improve London’s sewerage system and is expected to offer stable inflation-linked returns when fully operational.

In general, Hampton believes that investments in real assets are “less correlated” to stock and bond markets, provide stable inflation-linked returns, and can withstand some of the volatility currently seen in other markets. Of course, stability usually means lower growth in good times: over the past 10 years, the MSCI World Index has posted an annualized return of 11.6%, while funds in the infrastructure category Morningstar shares returned 7.5%.

Another key concern is better air conditioning. Ursula Tonkin, manager of the Patrizia Low Carbon Core infrastructure fund – which has posted annualized returns of almost 7.5% over the past five years – says this is a key investment area for infrastructure funds in a warmer world.

As with anything with an ESG label, retail investors should be aware that many of these funds do not necessarily invest in companies that are actively doing good.

Of course, solutions to infrastructure problems that rely on new technologies are not the safest place for retail investors. But there are also more stable options. Power grids are an example. Tonkin argues that with their stable returns and heavy regulation, they are a good way for retail investors to access the energy transition. “They are not inherently green, but they are a necessary part of the transition, in building renewable energy,” she notes. His fund owns the national power grids of Italy, Spain and the UK, among others.

As with all products that have an ESG label or claim to be sustainable, retail investors should be aware that they are not necessarily investing in companies that are actively doing good. It is often easier for them to weed out the worst offenders, which is why ESG funds have historically been overweight tech stocks, due to the move away from fossil fuel companies.

Fund managers can also opt for a “best in class” approach: investing in companies that are doing better than their peers when it comes to reducing emissions or making the transition to clean energy. The Patrizia fund owns Hawaiian Electric for these reasons: historically a major polluter but which has recently turned more towards renewable energies.

Of course, preparing for a warmer world doesn’t just apply to infrastructure. Fox takes this approach from a climate risk perspective: Which companies take it seriously and which don’t? National Grid, he believes, is well prepared. The commercial real estate industry is aware of the infrastructure risk posed by climate change; residential real estate not so much.

In the end, it’s easy for investors to forget that your final return is what you win minus what you lose. If you don’t focus on the companies that best prepare for a warmer world, losses could catch you by surprise.

Alice Ross is the FT’s deputy editor. His book, “Investing to Save the Planet”, is published by Penguin Business. Twitter: @aliceemross