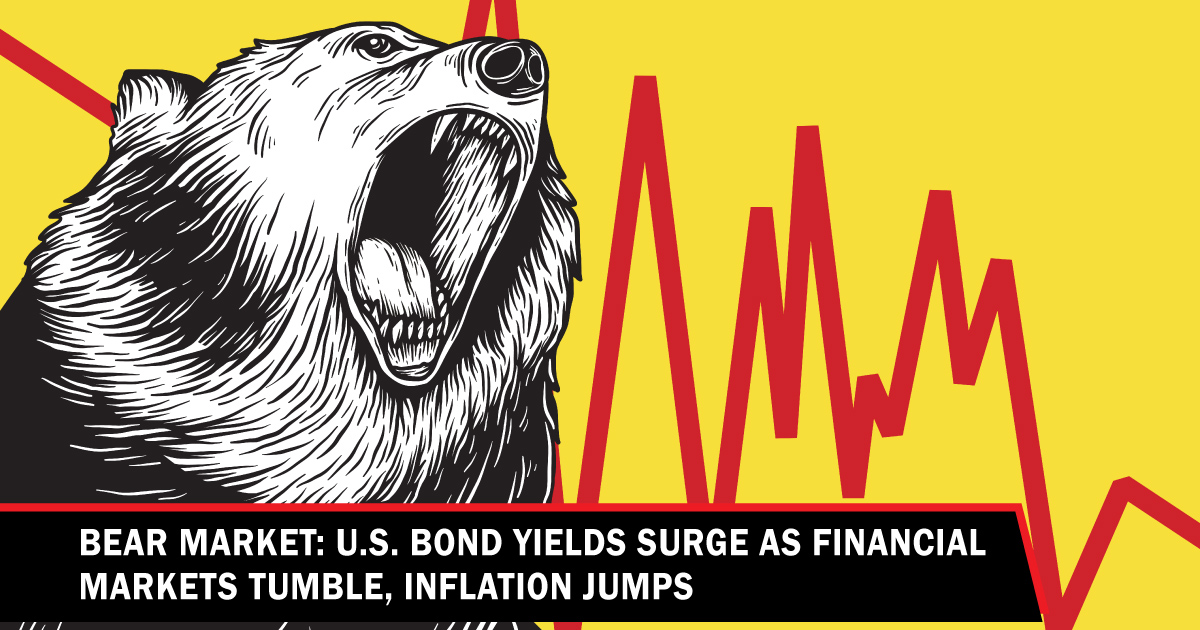 All of the major indexes – Dow Jones Industrial Average, S&P 500 and the Nasdaq Composite – fell today, raising concerns of a looming recession following reports last week from the US Bureau of Labor Statistics making report of a consumer inflation rate of 8.6%, the highest in 40 years, and a 3.0% drop in real incomes for the month of May. According to the Wall Street Journal, investors and traders are now speculating that the Federal Reserve will raise interest rates “higher and faster than expected.”

“The inflation reading has also boosted expectations for the Fed’s benchmark rate hike,” according to Matt Grossman of The Wall Street Journal. “Investors now expect officials to hike rates to nearly 4% by next spring, up from the expected peak of around 3% last month.”

The yield on the 10-year Treasury note closed today at 3.371%, a 10-year high. The yield on two-year Treasury bills settled at a new 15-year high of 3.279%. Higher rates mean higher borrowing costs for businesses, which affects their profit margins and can lead to asset deflation as mortgage rates rise for borrowers.

Typically, a bear market – a decline in stock values ​​- precedes a recession. A recession, on the other hand, is a general decline in a country’s production of goods and services, measured usually as two consecutive quarters of declining growth, as determined by the National Bureau of Economic Research.

The cryptocurrency market was not immune to today’s selloff. Bitcoin fell 17% to below $23,000 on Monday, down 66% from its November high. Binance was forced to halt trading due to a backlog issue, while crypto firm BlockFi later announced it was laying off 20% of its workforce due to the tough market environment.

The consumer price index for all urban consumers (CPI-U) rose 1% in May to reach a 12-month rate increase of 8.6% according to the United States Bureau of Labor Statistics – the largest 12-month increase since December 1981.

Gasoline inflation is 48.7% from a year ago, directly impacting farms, commuters and the supply chain. Over the past year, food prices rose 11.9% at grocery stores, the largest 12-month increase since April 1979. Meats, poultry, fish and eggs rose 14.2 %. Dairy products are 11.8% more expensive, cereals and pastries up 11.6%.

“Correct” inflation calculations for May 2022

The CPI-U (consumer price index) is the broadest measure of consumer price inflation for goods and services published by the Bureau of Labor Statistics (BLS). It measures the change in prices paid by consumers for goods and services. Methodologies for calculating inflation have changed over the years – once in the 1980s and the other in the 1990s. These changes in the calculations lowered the reported core inflation now used by the BLS .

According to ShadowStats.com, actual inflation based on the 1980 calculation would be 16.80%, a new high for 75 years.

In the chart below, ShadowStats.com, Alternative Government Economic Statistics for the United States, shows SGS-Alternate CPI estimates based on methodology that was employed before 1980. Many economists argue that this provides a comparison from apples to apples. to underlying inflation currently calculated by the BLS.