Until the eve of the crisis of 1929, the worst that America had ever known, everything was rosy. Cars and construction flourished in the 1920s, and strong jobs in both industries helped raise wages and consumption. Ford was making 9,000 of its Model T cars a day, and spending on new home construction reached $5 billion by 1925. There were bumps along the way (1923 and 1926 saw downturns), but the momentum was strong.

Banks looked good too. In 1929, the combined balance sheets of the 25,000 American lenders amounted to $60 billion. The assets they held appeared cautious: only 60% were loans, with 15% in the form of cash. Even the 20% made up of investment securities seemed reasonable: the lion’s share of holdings was in bonds, with ultra-safe government bonds making up more than half. With such high quality assets, banks allowed the capital buffers that protected them from losses to run out.

But as the 1920s progressed, the fledgling Federal Reserve faced a conundrum: Stock prices and store prices began to move in opposite directions. Markets were booming, with stocks of companies exploiting new technologies – radios, aluminum and aircraft – being particularly popular. But few of these new companies had a history of paying dividends, and investors piled into their shares in the hope that they would continue to rise in value. At the same time, established businesses looked weaker due to lower consumer prices. For a time, the puzzle – whether to raise rates to slow markets or cut them to help the economy – paralyzed the Fed. In the end, market watchers won, and the central bank raised rates in 1928.

It was a catastrophic mistake. The increase, from 3.5% to 5%, was too small to dampen the market rally: stock prices soared until September 1929, with the Dow Jones index hitting a high of 381. But that hurt to declining American industries. By the end of the summer, industrial production was falling at an annualized rate of 45%. To domestic misfortunes are added bad news from abroad. In September, the London Stock Exchange collapsed when Clarence Hatry, a fraudulent financier, was arrested. A sale was coming. It was huge: in just two days, October 28 and 29, the Dow lost almost 25%. On November 13, it was at 198, down 45% in two months.

The worst was yet to come. Bank failures followed one another in waves. The first, in 1930, began with bank runs in agricultural states such as Arkansas, Illinois and Missouri. A total of 1,350 banks failed that year. Then a second wave hit Chicago, Cleveland, and Philadelphia in April 1931. External pressure compounded domestic concerns. As Britain left the gold standard, its exchange rate fell, putting pressure on US exporters. There were bank runs in Austria and Germany. As public confidence evaporated, Americans began to hoard money again. A Federal Reserve bond-buying campaign brought only temporary respite, as the surviving banks were in such bad shape.

This became clear in February 1933. A final panic, this time nationwide, began to force more emergency holidays, with lenders in Nevada, Iowa, Louisiana and Michigan being the first to close. Domestic banks called interbank deposits placed with New York lenders, depriving them of $760 million in February 1933 alone. Naturally, the city’s bankers turned to their new backstop, the Federal Reserve . But the unthinkable happened. On March 4, the central bank did exactly what it was created to prevent. She refused to lend and closed her doors. In its mission to act as a source of funds in all emergencies, the Federal Reserve had failed. A week-long holiday has been called across the country.

It was the blackest week of the darkest period in American finance. Regulators looked at banks’ books and more than 2,000 banks that closed that week never reopened. After this dip, things started to improve. Nearly 11,000 banks failed between 1929 and 1933 and the money supply fell by more than 30%. Unemployment, which was only 3.2% on the eve of the crisis, rose to more than 25%; it would not return to its previous lows until the early 1940s. It took the Dow over 25 years to regain its peak in 1929.

Reform was clearly needed. The first step was to eliminate the risks from the system. In the short term, this was done through a massive injection of public capital. The $1 billion increase – a third of the system’s existing equity – went to more than 6,000 of the remaining 14,000 banks. Future risks were to be neutralized by new legislation, the Glass-Steagall Rules that separated stock trading from more mundane lending and gave the Fed new powers to regulate banks whose customers used credit to invest.

A new government agency was set up to deal with bank runs once and for all: the Federal Deposit Insurance Commission (FDIC), created on January 1, 1934. By protecting $2,500 in deposits per customer, it aimed to reduce costs of a bank failure. Limiting depositors’ losses would protect incomes, the money supply and purchasing power. And because depositors could trust the FDIC, they wouldn’t line up at banks at the slightest financial wobble.

Somehow it worked wonderfully. Banks soon began advertising that they were FDIC-insured, and customers came to view deposits as risk-free. For 70 years, bank runs were a thing of the past. Banks have been able to reduce costly liquidity and capital buffers, which have shrunk year-on-year. An inefficient system of self-insurance has collapsed, replaced by low-cost risk sharing, with central banks and deposit insurance as a safety net.

Still, it was not at all what Hamilton had hoped for. He wanted a financial system that made government more stable, and banks and markets that backed public debt to allow infrastructure and military spending at low interest rates. In 1934, the opposite system was created: it was now up to the state to ensure the stability of the financial system, and not the other way around. By placing the risk on the taxpayer, the evolution of finance had created a distorting subsidy at the heart of capitalism.

The recent fate of the largest banks in America and Britain shows the true cost of these subsidies. In 2008, Citigroup and RBS Group were huge, with combined assets of nearly $6 trillion, larger than the combined GDP of the world’s 150 smallest countries. Their capital reserves were tiny. When they ran out of capital, the bailout amounted to over $100 billion. The overall cost of the banking crisis is even higher, in the form of slower growth, higher debt and poorer job prospects that can last for decades in some countries.

But the bailouts weren’t a mistake: dropping banks of this size would have been even more costly. The problem is not what the state does, but that its hand is being forced. Knowing that governments need to bail out banks, part of finance has become a one-sided bet. Bank debt is a perfect example. The IMF recently estimated that the world’s largest banks received implicit government subsidies worth a total of $630 billion during the year 2011-12. This makes debt cheap and promotes leverage. In America, meanwhile, there are proposals for the government to act as a safety net for the mortgage market, covering 90% of losses in a crisis. Again, this pinpoints the risk on the public purse. It’s the same old model. 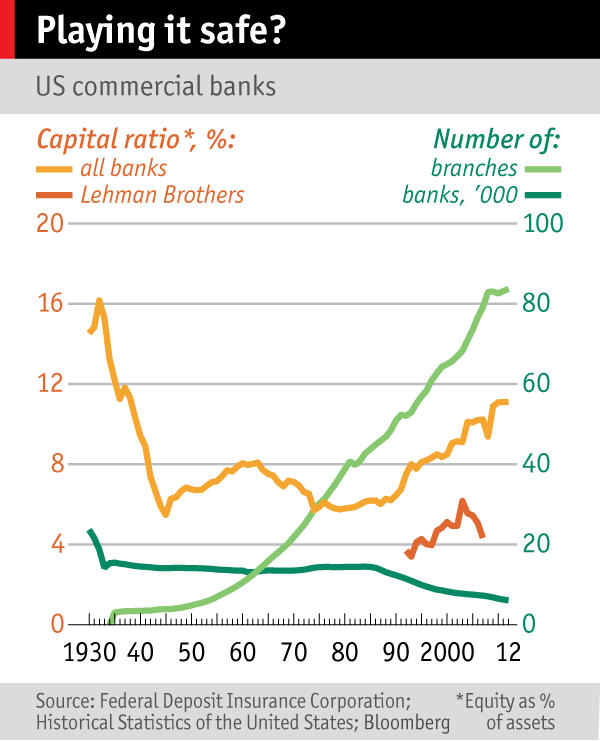 Solving this problem means putting the risk back in the private sector. This will require difficult choices. Removing the subsidies banks enjoy will make their debt more expensive, meaning shareholders will lose dividends and the cost of credit could rise. Cutting excessive deposit insurance means that gullible investors who put their nest eggs in dodgy banks could suffer big losses.

As regulators implement a new set of reforms in the wake of the latest crisis, they have an opportunity to reverse the trend of an ever-increasing entrenchment of the role of the state in finance. But weaning the industry off government support won’t be easy. As the accounts of these crises show, hundreds of years of financial history have pushed the other way.